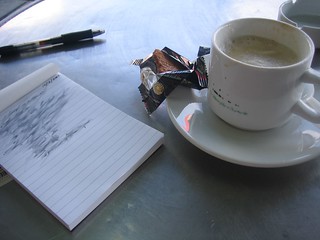 Travel is always interesting because, even if you have been to the destination before, it’s new again. Time is that stream we dip our cups in; the contents of the stream change even though we still call it a stream.

I was on an airplane not too long ago – I got up at 2 a.m., drove for an hour, parked, took a bus into an airport and stood in a TSA line for 45 minutes – where I quipped that they better have found a terrorist during that time to a few of the 500 or so people herded together by people in uniform, constantly reminding us to be in single file lines and to have our documents out and ready for the inspection 45 minutes away. We didn’t know it was 45 minutes away. For all we knew, there were people waiting for us with baseball bats around the next corner. Fortunately, this was not true.

Still, myself and a few others found hope in the imagining of all of this being worth it, that some would-be terrorist would be in stocks when we got to the end and that there would be rotten fruit provided to throw at them.

This was not to be the case.

From there, our new found friends scattered to different gates where we sat, waiting to be pressed into long sardine cans with wings – with windows that might as well have been a Hollywood set. We got in the air, and at 7:30 a.m. were allegedly in the air. By 8:47 a.m., we were allegedly in another airport – 6 hours and 47 minutes spent traveling to a destination that was really only 2 hours away from where I started, had fear-driven bureaucracy not given credence to what we endured.

In a shift of luck I have not experience in all my travels – and that is a lot – the gate for my connecting flight was almost immediately next to that of my arriving flight. I had time to get into yet another line for a protein shake since, without appearing despondent, the woman informed me that there was no coffee available at this hour. I am not so certain I mirrored her expression.

The next flight included 2 gentlemen on either side of me – one of which found an empty seat elsewhere, the other who was bravely maneuvering a pinata through 6 connecting flights… successfully. There should be a ribbon for that. And as the flight progressed, I decided to forego the pleasure of watching the latest Star Wars for the 2nd time, instead planning to doze. Pinata-man’s post nasal drip had other plans for me; his constant hawking lacked enough rhythm or lack of it to sleep to; I took the trouble to find my headphones so that I could block him out.

I ended up watching the movie, and one of the light saber battles began – an epic battle, twisting and turning, slicing, parrying and thrusting – a show that might have amused Musashi. Right in front of the screen, a woman apparently was so excited that she had to go to the bathroom, causing a wave of heads across the screen during the battle. Inwardly, I groaned. The battle ended as she hurried by. I sighed. A gentleman who had been dozing with his window blind down suddenly felt the need to open it and fill out customs forms during a dark part of the movie, allowing the sun to blind one of my eyes as I watched at a despondently dark screen – as if it were depressed by his actions.

And lo! At the very ending, my favorite part when Luke says not a word but volumes with his face, Mr. Pinata PostNasalDrip had an emergency requirement for the toilet.

We landed, and 12 hours later I was at my destination – eeking my way through immigration somewhat familiar, somewhat different, where invariably because of my passport the immigration officer would predictably say that I could have gone through the other line and it would have been faster (regardless of which line I was in). I grabbed my 15 lbs of belongings at the baggage claim, made my way through customs with decades of experience and absolutely no wit– something they do not appreciate  – and made my way out into sunlight, into a familiar land that was not so familiar, to meet people who were familiar but different, to deal with issues that were familiar but different.

Thinking is a much better way to travel. More leg room.

Hat tip to the Moody Blues for the title.