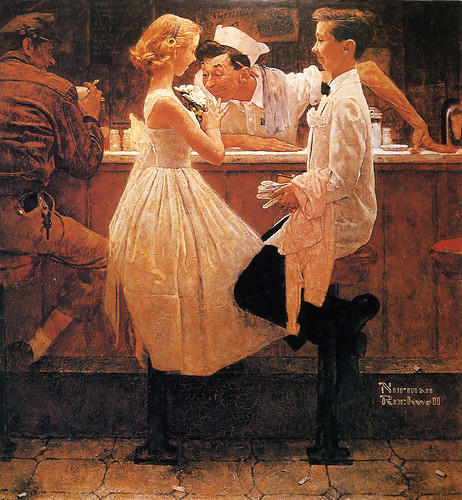 When I was growing up in Trinidad, uprooted from the United States, one of the few treasure I counted was a book of the art of Norman Rockwell. His work shows pieces of his life during his lifetime; casting everyday life into a full featured image that spoke volumes of the era.

It wasn’t all pretty, either. He had no trouble capturing the troubles of his time, but more often than not he portrayed the good parts of America.

You can find it in barber shops and pizzerias, small stores and small towns. A recent visit to a New York pizzeria in Edgewater reminded me of these and the value of them. The owner was talking to a teenage boy when I walked in; he was saying, “You have to care. We’re all connected. You can’t tell me you don’t care.”

“What do you mean you don’t care? You come here, you have friends, you’re smart. Are you telling me you don’t care about any of that?”

The big man wearing the floured apron shakes his head, looks at me and his eyes light up with recognition, “Hey, how you doin’?”

“Doin’ good, doin’ good. Go ahead, I’m figuring it out”. He knew I meant the food, but the side glance also told me he understood I was listening, “OK, shout when you know”.

This kid left with his friend soon after. An older gentleman, his blue collar creased, gets a phone call. His voice changes, we look at him. “I gotta go. Mother-in-law stopped breathing.”
“Wow. Going to the hospital?”

“No, going to find her insurance. They’ll want her insurance, and I gotta pull things together in case the worst happens.”

“Yeah. Everyone will be at the hospital, someone’s got to see about the other stuff.”
“Yeah, did it with my Dad.”

I think to myself that the guy looking after the practicalities is almost always me, and when everyone else is done with whatever mourning, that’s when I usually start. I say that, and we all kind of look at each other. “Yeah.”

He leaves. The owner and I talk about the kid; the kid had said he didn’t care, he’d walk through any neighborhood, that he could hold his own. We look at each other and shake our heads. I say, “He’ll learn one way or the other.”

“Yeah, but you know, he’s a good kid, he’s smart, but the only time he left home was when he probably went to Disney or sumthin’. He doesn’t know. The world isn’t like here.”

I nod agreement, thinking of the Allegory of the Cave for a split second, realizing that there was nothing to be said. I think about the difference between schooling and education, I think about how insulated the world is despite the wonders of our technology and how even our social networks cause us to be even more insulated from people who think different, who are different. And I come back to the moment, to a pizzeria in Edgewater, Florida, owned by a guy who left New York as a kid, who is a fixture of the neighborhood – more so than any Walmart. I think about my old barber in Beloit, Wisconsin, and about how such small businesses are the unspoken glue of culture in a society. Bastions of humanity and life in microcosm.

I order my spaghetti and sausage. A lady walks in, she says, “I always order from you but this is my first time in here! I like it!” He thanks her.