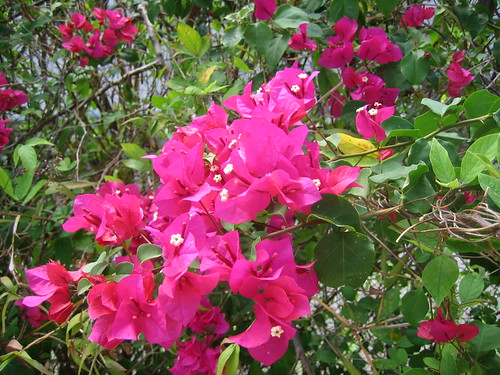 Adolescence was an unhappy, angry time for me. And it was at this time I found a spot as far away from everyone as I was permitted, a point in the triangular yard where I could sit and think – and yes, write. It was my spot.

It had an unkempt Bougainvillea spectabilis in that corner that allowed me some illusion of privacy while I could watch all round, my back against a wall. It was as secure as I was the opposite, the bougainvillea hiding me under it’s thorny branches. The call of the Uncle, the search by his toddler son, the incessant calls of the stepmother to do things she could damned well do herself, and the father who could always find a reason to be angry.

It was my bubble.

A bad day at school saw me stride into that thicket and it tore at my uniform, ripping my pants with a thorn. My pants. The pants that I maintained, that I paid to fix myself, that I washed and pressed, and that were always a problem to get new pairs from because they had to be tailored. Something in me snapped – years upon years came out in that moment, something pure and distilled. I remember staring at that thicket and unilaterally deciding that the bougainvillea needed to go.

I went downstairs and grabbed the camp axe, cutlass and file next to the stairs after a change into my shorts, and I went to work. I just let it all pour out on that Friday evening, the muscles that had grown from toting paper, electric motors, bricks and buckets of concrete lashed out with sharp blades. The bougainvillea fought back tenaciously, ripping back at me as I methodically focused my rage on each branch.

During that time the stepmother came out. “Did anyone tell you you could do that?” I stared at her a moment and continued, knowing her next step would be to wait for my father or uncle to return so that they could defend her soap bubble of ego – so large, so fragile. It fueled me. I simply said between swings, “It ripped my pants. It has to go.”

I decided then and there I would not stop, whatever the cost. Whatever the punishment.

I continued, picking branches one by one, finding ways to get in to that thicket without getting hurt too much, and delivering strikes for every wrong I felt had landed on me, every scratch simply pushing me further into this meditation of rage. I had moved being past being scared of what I could do.

I would do it. Let them sort the shit out later with me. They always do.

My uncle showed up first, going up the front stairs. I heard their voices as they spoke, but he did not come down. I kept going, about half way done, a pile of thorny branches at the base of the fence.

It was at this point that I realized that I hadn’t seen my dog, and called to her – she came, but she was sheepish around me. She sensed something and wouldn’t come closer than a few feet. The one creature in the yard that loved me without question would not come near me, and that fueled me more.

The thud of the blades had become as dull as they were. I fetched the file from where I had placed it on the ugly red wall and sharpened everything. And I continued. Every now and then I’d hear distant voices from the house less than 50 feet away, talking about something.

My father had come home without me knowing, and as the sun glimmered its goodbye, he had quietly came over and brought a large cup. I saw that big yellow cup and him behind it. I waited a moment to hear what would come but he turned and walked off without a word. I continued and did not stop, only a few more branches to go. The fence was clear – all 16 foot of the point of that triangle. I stared.

I didn’t want to be done.

I really didn’t want to be done. And slowly, the weight of being done crept up on me even as I wanted more to cut, to punish for my anger.

There wasn’t anything left.

Cutting the branches on the ground was pointless.

The cup. I drank the cup down – water – and turned, sitting in my corner, watching the sun set. I went and got some gas, soaked the root, and lit it. I stayed with it until it burned out, adding branches now and then.

By the time I got back inside, putting everything back next to the stairs, there was no one in the living room or kitchen. I went to my room to get ready for a shower and found myself staring in the mirror within the wardrobe. Splintered pieces of that thicket, as well as some leaves, punctuated the sweat and blood – there was blood – in the reflection.

Any feeling of victory was gone. I saw a gruesome sight in that mirror. Teenage muscle rippled under a bloody and dirty visage. I had destroyed that bougainvillea. I showered and, without encountering anyone, went to bed.

I was to find that it would never be spoken of.

Something had changed. Punishment all but disappeared but for the greatest of infractions – real or imagined. Yet there was no sense of victory, no sense of things having changed for the better. They hadn’t.

But that bougainvillea never ripped my pants again, and I no longer had the illusion of hiding there.

No one else intruded.

Years later, I realized how sad a day it was – that the people around me had learned to fear me as they had taught me to fear them… and I no longer feared them.

A hollow victory with a bougainvillea proxy.
An education you can’t find in a school.

One thought on “Death of A Bougainvillea”