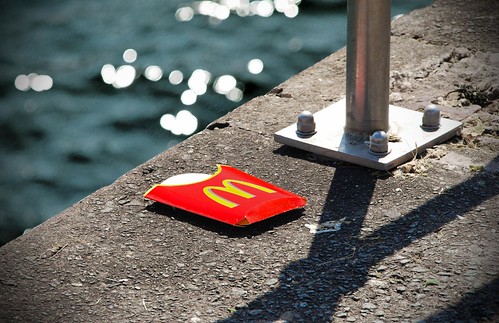 “ I see all this potential, and I see it squandered. Goddamn it, an entire generation pumping gas, waiting tables – slaves with white collars. Advertising has us chasing cars and clothes, working jobs we hate so we can buy shit we don’t need. We’re the middle children of history, man. No purpose or place. We have no Great War. No Great Depression. Our Great War’s a spiritual war… our Great Depression is our lives. We’ve all been raised on television to believe that one day we’d all be millionaires, and movie gods, and rock stars. But we won’t. And we’re slowly learning that fact. And we’re very, very pissed off.”
— Tyler Durden (Fight Club, 1999)

People are angry. At the turn of the millenium, though, just about every model showed that there would be more social unrest.

Every day, my generation and those after are inundated with marketing about how products and services are going to make their lives better – with the goalpost of better being set culturally by old ideas that bureaucracies were built to attain. They grew like trees, twisting and turning with the weather of domestic politics in every nation until the Internet, where global politics still sways them like a hurricane force wind.

These are largely all flawed systems that some have grown to depend on. The systems are sometimes failures, based on notions that no longer seem to apply in society, but citizens around the world were told that the benefits of the systems outweighed any negatives. There are generations now that beg to differ.

And they’re angry. Sad. Disillusioned. In the U.S., I’ve seen people my age working 2 and sometimes 3 fast food jobs at a time in a downturned economy where the banking systems quite literally strip-mined people of latent wealth through bad mortgages and loans. In the Caribbean and Latin America, I’ve seen the shifts of global politics make economies tumbleweeds. In Trinidad and Tobago, where the economy was never diversified as it should have, I contrast the people at Starbucks with the people that still use outdoor latrines almost daily.

Ahh, marketing. Immigration becomes an issue for the mass media producing countries- the world looks so much better on a flat screen, which used to be only a large white screen for a projector but now includes wall displays, computers and yes, even phones. “We’re wonderful. You’re not allowed here. Special terms and conditions apply.”

And if you do get there, a different reality sets in.

People all around are figuring this stuff out – that they can’t have what is being branded as developed nations. Terrorists, for all the wrong reasons and for imagined good ones, started attacking these ‘evils’ that they see just like a crab drags other crabs down in the barrel. “It is our reality, let us share it with you…” – horrible atrocities, branded under religious fervor but really just really, really bad marketing that directly kills people – a waste of life – too combat the overly good marketing that indirectly robs the majority of the human population with a sense of value.

Every bright eyed idealist and gilded futurist looks forward optimistically. I do so myself, though I’m careful with expressing my thoughts since all these flawed systems came from people not thinking things through beyond political terms, or because of emergencies.

We have been walking into thorny bushes. It might be time to reassess the systems we’re using that lead to all these injuries on our more sensitive parts of society.