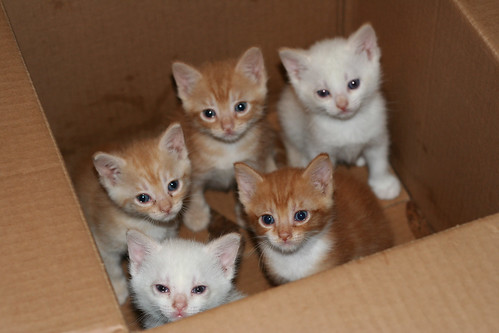 Update: Seems like someone was monitoring the box – it was gone today, with the kittens. Guilty consciences can be a bitch.

Someone left a box of kittens next to my freshly graded driveway on the land. Not the ones pictured, I did not take a picture of them.

In fact, I passed the box for a few days before one day I looked inside. Kittens.

“Kittens”, I thought, “What should I do with them? And what sort of asshole would leave them here? They must have been here for at least 4 days.”

I looked them over. They seemed in good health, but I am no kitten expert. I do know, however, that there are cats nearby. I know that there are homes nearby that had kittens. I look at the kittens again.

Genetics are pretty easy to go by. I knew where these kittens had come from. I could toss them in the back of the pickup and take them back. I could also take them to some humane society, but I know how that works too – languishing animals waiting to be adopted, pictures circulating on Facebook posted by upset people – typically women in my streams – and how they wish people were better… people.

And no one seems to have thought all this through, or seen it through, and seen that domesticated animals procreate even more than humans. There’s just too many.

I peer in the box again. I have no space for them where I am staying until I build my home – I barely have space for my thoughts there, much less kittens when the resident cats on the roof would probably eat these things alive. Literally.

Wait. How did this become my problem? I’ll tell you how. Someone had a cat, or cats, and they leave them outside to fend for themselves – much as they do for dogs in Trinidad and Tobago. They control pests, and they’re of fleeting use that way though they are more of an invasive pest that kills birds – which, really, on agricultural land we’re good enough at with pesticides, weedicides, fungicides, all the ‘-icides’ that we use.

I could take them somewhere and hoist them on some children whose parents would be stuck with them. With litter boxes. And let’s not forget the links to mental health that cats have.

The mother is nearby. This I know, because I know where the kittens came from.

I move the box from the drain so they don’t get swamped in a rain. That I can do.

The next day, I look in on them. They seem to be well. And the next day, and the next day. I do not interfere anymore. This is the world we live in. There is little out here for them to eat when they grow older unless they hunt, and they will eventually find their way back to the place that dumped them off and tried to make them my problem.

Failing that, the predators will get them.

Failing that, they become predators.

It is the way of things.