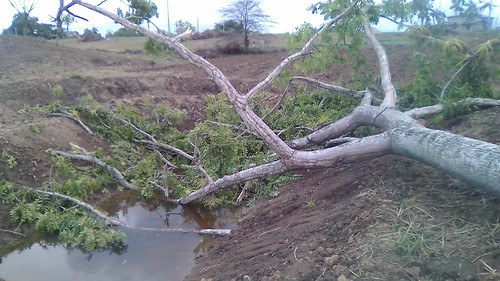 Like most suicides, it gave no warning. The machinations of digging the pond included the tree being over the pond.

The pond was dug right at the very end of dry season. The tree seemed to be fine, this large hog plum tree. No roots were broken, no damage to the tree.

Leaning against it, I learned of the biting ants and learned… not to lean against it. It became a landmark of one of the many things to avoid casually touching on the land, like the weaponized chlorophyll of the Trinidad Roseau.

Maybe it was that lack of touch that was the signal. Maybe, somewhere in the latent consciousness of trees it decided it was not just alone but lonely. Maybe I had chopped down some of it’s children and it couldn’t stand to live without them. Maybe it had seen it’s reflection in the beginnings of the collected water of the pond and it didn’t like what it saw.

Whatever the reason, I found it in the pond one day, broken at the roots. At the roots, I saw the stone. 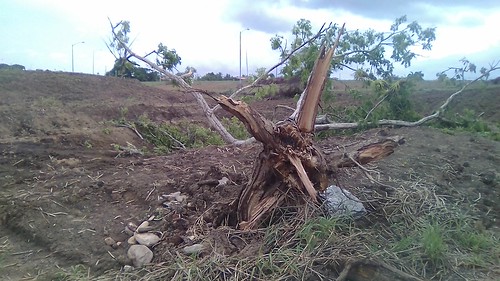 I do not know why it committed suicide. It seemed happy enough. And here I was left, having to remove it’s burdensome body from the pond, something that between the pickup, tractor and excavator was done… dismembering it accidentally here and there. Corpses are so fragile.

I write all of this to show how easy we are to anthropomorphize non-human things, and how we treat humans like non-human things. About how people commit suicide every day – U.S. military veterans alone at a rate of 22 per day, once every 65 minutes – dismissed as numbers that march into the sunset.

Civilians, too, who pass quietly into the night, not the celebrity.

And here I wrote about a suicidal tree.
And you read it.

Share this to support Suicide Awareness. The life you save may never know.

One thought on “On Suicidal Trees”