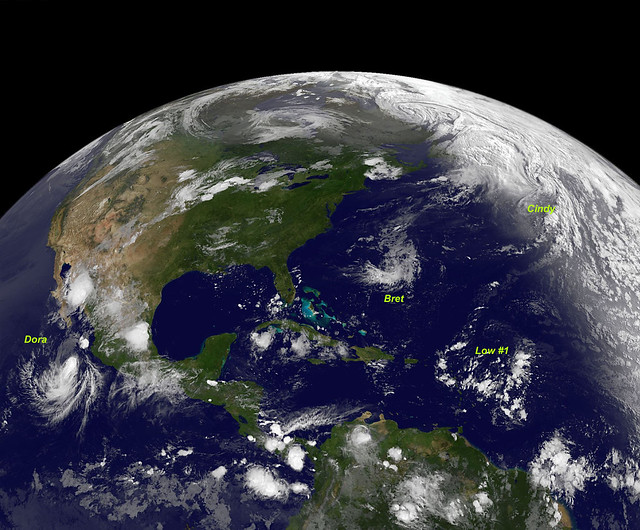 Some cyclone became a Tropical Storm, and that Tropical Storm gained a name. Bret. An unimaginative editor or writer at the Trinidad Express newspaper quickly dubbed it ‘Bad Bret’. Now Bret has a price tag of a billion dollars. Politicians have resorted to… oh, I suppose you should call it politics though it resembles the refuse on the floor of a flooded kitchen, recently pumped out, the smell of decay evident.

It was all fairly predictable, and I truly wanted to write something funny about it – but in the end, I was sick after having mopped up Brett’s drippings from a roof all night and I haven’t been feeling very funny. In fact, it’s the beginnings of a dull rage.

Trinidad and Tobago has a love affair with a few things. It’s important to understand this.

Let’s take that low hanging fruit. The drainage is typically filled with rubbish, and that rubbish did not magically appear there. It did not suddenly get warped in from another dimension.

People threw it on the ground, it ends up in drains, drains lead to rivers… and so on. So, when you occlude waterways… well, let’s put it this way: Trinidad didn’t flood as much as it had a stroke from living a poor lifestyle, plastic plaque on it’s arteries finally stopping the flow and creating the hemorrhage that people are complaining about now.

Forget for a moment the technology failures surrounding Bret that I documented. Let’s not talk about the Minister and Minister, Prime, out playing golf – because, really, if I were the Prime Minister I would be expecting people to do their jobs and know that my job would come after. Personally, I might have shot some pool.

The point here is that there were people who were supposed to be doing jobs. The day before Bret struck, my social media accounts were filled with a long list of who would be closed after Bret, including Tobago’s governmental offices. The Prime Minister would come out and say that people in government offices should come out to work. I’m not sure what he meant, but what I thought was that the one time that government offices need to be open and dependable would be the day after a potential disaster. Instead, this all beckoned the bacchanal of the Prime Minister not caring. I’ll stop there with that because calling political opponents names is also something I’ll be touching on.

In some ways Trinidad and Tobago is a Libertarian paradise. There are Laws for building that are conveniently enforced, there is some rudimentary land Law that puts private landowners in financial straitjackets when it comes to people building on their land. Nevermind electric connections or water connections. Someone always knows someone.

By the time you could get an injunction, you might have 3 generations of a family in it – and the police, despite it being trespass, even with a surveyor present, will tell you that it’s a Civil matter, and that you should go to a lawyer. All of this will require High Court, which means it’s not cheap and it’s a long and arduous process – which culminates, unpredictably, on either the landowner ‘winning’ – where the house is torn down at their expense, with public outcry… or the landowner ‘losing’, where some other arrangement is come to.

And if it’s government land, that’s another problem altogether.

So that’s the base layer – what I call ‘vikey-vike’ development. If Town & Country planning actually rolled through flooded areas, should we bet on what percentage of homes would have plans?

Let’s not get into Regional Corporations going rogue, running roads on private lands based on the requests of some people… with no plans filed. Nothing.

So, this has been happening for decades. It creates it’s own problems of infrastructure, which you would expect, but it also caused some call to action – the government made some weak steps toward developing infrastructure in housing schemes, etc, but they were typically as well conceived as a stillborn. This is to say that they were well conceived, but conception is not the issue – bringing things to term is. And, really, Trinidad and Tobago isn’t very good at taking things to term. Since my earliest memories of Trinidad and Tobago, the Godinot bridge and Mosquito Creek were being widened. 2 Attempts so far have only compounded flooding issues rather than resolve them.

Oh, there’s fire under this pot. Plenty of lack of planning.

Speaking of substandard projects, here’s another problem. If, for example, there’s a WASA project going on – water pipes – and there are materials brought to do it – do you know how much of those materials are actually used? Do you know how much are sold by people who aren’t getting paid but have bills to pay?

So, a few years down the road, when a pipe fails or a drain collapses or is occluded, it becomes an emergency then that could have prevented during the project… simply by paying people.

Unless, of course, they order extra materials to sell ,which becomes a taxpayer issue and is not relevant to flooding.

Even before the rains began I could picture the Members of Parliament in their tall boots, firing off as much political rhetoric as they could. And of course, distributing things. People want to be coddled, to be seen in their distress – but to use that as a political soapbox is as abusive as the rains themselves, even if the people do not feel abused. It’s amazing what sorts of abuse people will consider love if that’s all they know.

This just makes matters worse, really, particularly when it comes to floods. Playing on people’s emotions is the worst part of politics, particularly stirring the pot of anger when it has no productive way to come out. And it’s not to say that it’s a matter of who is in power – it’s what we call a pappyshow in Trinidad. Everyone acts as if they are concerned now when they did not make their concerns concrete before.

Show me hot air blowing after Bret, I’ll show you air that was not moving before it.

“Pardon me, your omnipotence, Your Honourable Trini-Ness – your ass is soaked.”

And What Happens Next?

It’s all as if we live under different skies. Different perspectives of the same problems.

Apparently the politics hit the level of accusations of racism yesterday in Parliament – you’d think that a group of professionals that were elected could work together for the common good, but in the end it is not so. I won’t even do you the discourtesy of linking to articles regarding it because there is no journalism to be found.

Personal differences, high emotions, what have you – people were elected to do a job to govern the country and are always somehow doing their utmost not to work together.

It’s one of the wonders of Trinidad and Tobago, eclipsing the Pitch Lake – the illusion of professional governance, of working together. If there is only one thing to blame for the state of the flooded areas in Trinidad and Tobago, I would say it has been decades of politics that have robbed the citizens of progress. Of followers that will not criticize their own and will defend til death (or drunken stupor) their candidates of choice.

Nothing changes. The waters will recede, life will go on. Whoever is Prime Minister will change, or not, but the dysfunction will continue because of the one phrase in T&T everyone knows.

One day, people may stumble upon the idea that they live under the same sky, that the Members of Parliament are supposed to work together. Someday they may just elect someone else when their representative doesn’t get them results. Whining doesn’t matter.

But we’d have to get past a lot of other issues, issues that assure the soap opera continues to assure people think they live under different skies.