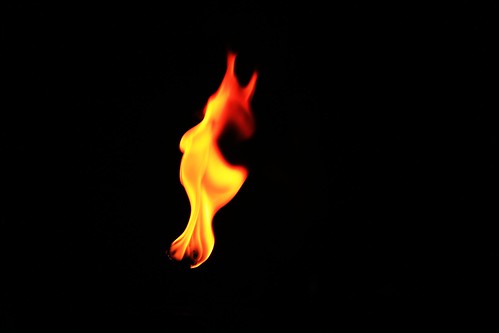 It was the 1989, and I’d pretty much given up on DeVry Institute of Technology. I was making good money as a programmer back then – it was a good time for programmers. I’d bought an FZR 600 off the showroom floor, cash. It was a nice trade-up from the mountain bike I’d been riding all over Irving, Texas, through the back-trails to get here and there.

Between work and classes, I didn’t have much time. The friends I had were… really, more of acquaintances. I told everyone I was heading to see some family. I wasn’t. I was getting away from everything.

Dropping some bags in storage, I saw a familiar face – she used to come around and see a roommate at one point or the other, but she was dropping some stuff in storage too. She waved, I waved, and we talked – it ends up she was heading to New Mexico. I had some time to kill. New Mexico it was.

Hillsboro. That sounded interesting enough for me. We camped in my storage area that night and broke out at dawn.

I had a light backpack set up for myself; she had a duffel that I tied to the back of the bike. We rode out.

There’s nothing quite like riding a motorcycle on the open road. Stopping for gas, bathroom breaks, bad food and worse coffee, we made it there in 2 days, just enjoying the ride. I learned that the FZR 600 was not intended for long rides, but I was younger and bulletproof.

We got to Hillsboro, she directed me where she was going, and I dropped her off.

A hug, and off I went to – I think it was – the Hillsboro General Store’s Country Cafe. It ends up I was in luck – it was the only place in town to eat. Eyes watched me as I moved to sit, but everyone was friendly. Small town, and I’m not from the small town. And, really, I probably looked dirty.

A thoughtful meal, a pack of smokes at the General Store, I sit on the FZR, arms draped over the handlebars. Leaned forward. She’s walking toward me.

She has her duffel. She walks up, a question on her face. It’s dim, but I can see the question.

We got some sleeping gear, camp cooking stuff and rode out. I didn’t know how long we would be there. She seemed to have an idea, so she lead the charge.

And so we rode out to Gila Cliffs Dwellings (they didn’t have a website for it then), where we hung out for… a week. Really. We didn’t know anything about the Mogollon Culture or the history of the cliffs. It just seemed like a good place to be and we were good at avoiding the Rangers. There were a few jokes about ‘pic-a-nic baskets’. Aside from scrounging food, we just hung out in the dwellings and stayed out of view.

It ends up we just needed a place to be for a while – apparently, like the Mogollons who had made the dwellings.

Millennia of evolution has taught us that night is the time when we’re safest in our most modern and conveniently stocked caves.

Our homes are still caves, bathed in electric light with comfortable places to sleep in safety. Children still fear the dark, as do more adults than would admit it.

But all of that lacks stars.

We pollute the Earth with all these lights at night that you can’t really see the sky. We spent a lot of time looking at the sky. We also didn’t talk too much – she had her reasons, and I didn’t have too much to say. When one of us was hungry, we made something – and handed the other person some of it. It’s just the way it was.

Half of the week passed before she asked, “When do you think we should go?”
“Not yet?”
“Not yet.”

It was a good way to live. I’d sit there watching how the place was built – imagining how people lived there once. Maybe had a family. Maybe it was really noisy. Or maybe they were quiet like we were.

I don’t remember why we left- it seemed completely natural. The odd thing was that she threw her notebook in the fire before we left and stared at me. I nodded and threw mine in the fire too.

We left, and as we were hopping on the FZR, I asked her where she was headed. She shrugged. Something in the way she had acted, been and spoke made me think of Hillsboro, but I wasn’t going to mention it. I figured I would just stop there on the way to whatever came next.

It’s a short ride back, really, and I was rested. I started slowing down around Hillsboro and she tapped me on the shoulder. I looked over my shoulder, and she was pointing past the town… and she meant it.

A week later we ended up where we’d started from. A quick hug, and we went our ways.

We didn’t know each other’s names.

We didn’t seem to have to.

These are the little interludes in life that happen when you ride off the beaten tracks, the rat races, and the common… wisdom.