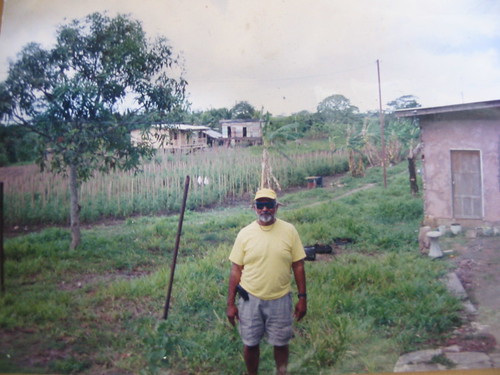 Yesterday marked 12 years since my father passed away. I am reminded every year in Trinidad and Tobago only because of Emancipation Day.

To say that our relationship was complicated would make a British person cringe at such use of understatement. We rarely agreed on anything, and if we did we, as individuals, wondered what was wrong.

So I wondered how the conversation would go, so many years gone by and myself having grown entirely out from under his shadow.

I expect my father would start it off. He was good about that.

“I’ve been dead 12 years. What have you done?”
“Well, I’ve turned things around on the land. People have gotten to know me and are coming around.”
“Good. You learned how to deal with them. I didn’t think you had it in you to squeeze them.”
“Well, I didn’t squeeze them.”
“What? They’ll take advantage of you!”, growling, “You can’t be soft! They’ll walk all over you!”
“Well, they walked all over you when you were confrontational.”
“You don’t know what you’re talking about.”
“I have 12 years of knowing what I’m talking about. Your ashes blew away from Mosquito Creek with you not having enjoyed anything about the Estate. I tell the people who have problems with you to go down there and shout into the wind.”

He glares at me, then sighs. “That was always the problem I faced.”

“And I don’t have that problem simply by not making it mine.”

“What happened to the workshop?”
“Oh, you’ll love this. Your sister closed it.”
“What?!”
“Yes. Your brother had a stroke, a lot of things happened afterward that boiled down to her taking control and she closed it. ”
“You were supposed to run it! Or one of your cousins!”
“Well, truth be told only one of us ever really wanted to run it and when it came down to it, he didn’t really want to either. And your sister made sure of that.”
“Hmm. Which sister, anyway?”
“What, you folks still don’t talk?”
“Don’t be a smartass, tell me which sister.”
“Does it matter?”

“See, you’re all dead but two. It’s a brave new world.”
“How is it?”
“If you were here, you’d probably die of heartbreak.”
“Oh.”
“Yeah. So did you ever talk to your father like we’re doing now?”
“Many times.”
“Drove you crazy, didn’t it?”
“What do you mean?”
“You never really got out from under his shadow, did you?”
“What?!”
“Well, the closer to death you got, the more you talked about his visions and plans.”
“I did?”
“Yeah.”
“I didn’t realize that. So are you trying to do the same as you get closer to death?”
“Nope. Your visions and plans are gone with you – have been for 12 years.”
“So why the HELL are you even talking to me?”
“I thought it would be interesting. I thought about how you imagined your father, and I imagined mine. And you’re here. And now… you’re gone, left as a part of my memory and imagination in a small room of my mind. I may visit you from time to time, but you are only me remembering you.”
“You always talked about shit like that. Unproductive!”
“Generally speaking, yes, this was unproductive. But it was closure.”
“What?! You little…”