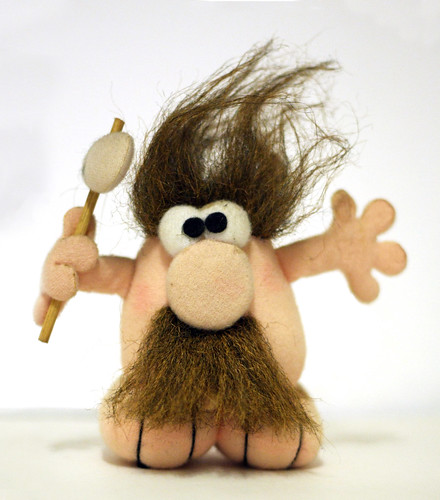 It didn’t start this way.

It used to be that when you didn’t agree with the group, you’d wander off somewhere else on the planet and do your own thing. It could be about anything – if you saw more good in the risk of leaving the group than the bad of staying, you could wander off. Do your own thing, whatever it was, wherever you went. It was all pretty straightforward. If you got a group together that agreed on this, you’d have your own little starter tribe moving off to another part of the world.

No matter where you go…

The beauty of the world was that we hadn’t quite figured out that it was round, much less finite. It was all pretty infinite since we were using our feet back then. Then more you disagreed, the further you and your group walked. Maybe you were very angry but you find somewhere relatively near that was hospitable, and because of that you ended up closer than you probably should have to your original tribe. So you came up with a tree branch that you could whack other people with, or you figured out how to sharpen it. If you encountered people that you didn’t like, it was a simple matter of whacking them over the head or introducing them to your sharp and pointy stick. Eventually they would do the same.

Maybe you reconciled. Maybe you didn’t. At some point, you either ran out of people or one group moved further away than another. Things moved on. Nobody remembers Ug’s last stand where he was surrounded by pointy sticks, all begun because he believed in picking the fruits a little earlier than they did. Ug felt strongly enough to die for it. He’s not in your history books. Ug also had strong feelings about quantum mechanics, but we’ll never know.

If only Ug had wandered away, we might know.

And so diversity in thought came to the world as people moved just far enough away from each other to not get on each other’s nerves. They created little genetic pockets that caused a change in appearance, however small, even as they figured out how to make metal to chop down forests so that they could use that new invention, fertilizer. Populations grew, and soon the distance that was far enough some time ago was no longer far enough away for some. Wars were waged, walls were built, and conquerors decided that their way of life was so good that people wouldn’t mind a little violence to have their way of life.

As luck would have it, during that violence many people who disagreed with the invading way of life would be removed from the planet…. or the invading force who was convinced of how awesome their way of life was were removed. None of this was decided on merits. It was decided by technology, by aggression, and by strategy. There are some that say that this hasn’t changed very much since.

During all of this, one of the descendants of the folks that killed Ug – remember Ug? – figured out that things floated and, with a little work, they could make things that could take them over water. On a planet mainly covered in water, this was a pretty big deal though they didn’t know it at the time. Some guy would later be accused of proving the Earth was round the same year that the globe was invented, all because he was lost. He wasn’t the first, of course, but the people who wrote the history books wanted him to appear first – so he did. We know better now.

And so some people got to wander again, finding different lands where – surprise – they found different people who had been minding their own business and fighting with each other for as long as  they could remember. This was inconvenient, so after a while they conquered them if they didn’t slaughter them. Or, maybe it was time to have some slaves again – slave technology had been around for a long time and hadn’t changed much. For slave owners, who had the authority and power granted to them by themselves, sea faring meant being able to travel with the comforts of slavery to do things that they wanted to do without getting too dirty or sweaty. That these were other human beings didn’t mean too much to them. In fact, they denied it despite obvious indications that this was so.

Populations grew. There was no real place left to wander, and when you get enough people packed closely together for a long enough period of time, they find things to fight over. They did. World Wars came and went, bringing aircraft into the mix even as they started flying around. And so things went.

Meanwhile, with people all over occupying more and more land, there needed to be more effective ways to communicate. Before you know it, there were wires running and people tapping away in code to let other people know something that someone thought was important.

This evolved to the Internet, which you are likely using right now. Connecting the world that had been made of wanderers, it demonstrates how far apart people have grown more often than not.

…there you are.
– Confucius