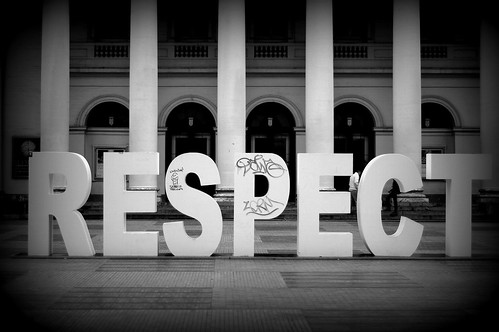 We know a few things about respect: it has to be earned and it’s hard to get back when lost. This parallels trust – trust and respect go hand in hand this way.

We can trust someone we do not respect to do what is in their ‘nature’. In fact, some even expect it of them: A simple label can conjure up images of what such a person is or might do based on what they have done. That label and ‘trust’ is what builds out our negative prejudices (yes, there are good prejudices as well). Feminists often make the case that simply being a woman means that they are ‘trusted’ to be certain *things*, objectified in their own way. Black Live Matters makes a similar case about people of African descent (paying lip service to other minorities), Blue Lives Matter makes a similar case about police. We trust for better and worse that people will act in certain ways based on other things in common.

It should scare people slightly that this is how we write our software that analyzes data as well.

The problem isn’t respect as much as it is trust. It’s what we trust others to do that is the problem, our brains evolved for survival in a planet that we have become dominant over except in a few special cases.

So the next time you distrust someone – which is just trust in a different direction (for the nerds, it’s a vector instead of a scalar) – take a moment and allow that trust to change.

Or don’t and submit yourself to the status quo.

One thought on “Respect, Trust”