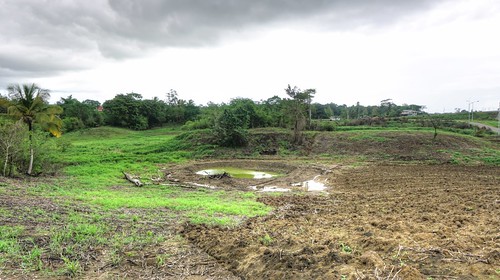 Wet season in Trinidad. The grass has overgrown, the cassava risen taller than me in some places, shorter than me in others. The road progresses despite challenges, materials coming from a sandblasting company that needs a place to put it – my road will eventually benefit, but not right now. It’s all dependent on the weather, and for the last few weeks I’ve been paralyzed.

Yesterday, the sun finally came out and I went for the wayward center of the cassava and papaya (paw paw) to spray, disentangling the crops and other trees from weeds – pushing back against the inevitable march of a tropical climate.

Even with my experience and Artsy (a Ford Ranger I so named), there are places I don’t go in Wet Season – the valley almost completely off limits for someone who doesn’t know where to put the tires, and even then not casually. The wayward excavator that had pulled out the hog plum tree from the pond had created it’s own drain, a tribute to no one else doing anything on my land without my presence, making the area around the pond an unnecessary quagmire in wet season.

And yesterday, driving over the pile of sand an idiot driver left at the top of my drive, compressing it slowly as I drive in and out every time, I managed – of all places – to get stuck. I laughed, immediately grabbing my spade from the back of the pickup, and began shoveling Artsy out of the sand. In it’s own way, the sand pile does something for me – and me getting stuck was something I expected at some point – the tires on the pickup are for mud, not sand. Having just sprayed weedicide, I didn’t want to handle the camera so there are no pictures of this.

A half hour of shoveling at least showed me the problem. The weight of the pickup was on the sand around the center of the chassis, the right side of the pickup unable to get purchase with its tires. A break; the sun had come out completely, a phone call to someone who might be able to help with a tractor – useless. As usual, this person was telling me what they couldn’t do instead of what they could. Back to shoveling.

Another break. I looked across where I knew another tractor was, but they are related to the people who had built a house on my land without permission and who said they were going to buy but instead decided to continue working on their mansion – swimming pool included – instead of begin paying for the land, and had the gall to complain about a price 1/8th of the market value. Next year it goes to 1/4. I would see no help there, even with the best relationship, such help would be seen as a betrayal of family.

I laughed.  No doubt someone over there was watching. A few more phone calls. More people telling me what they couldn’t do instead of what they could do. Here I was, the dependable person surrounded by undependables. Another call, an offer to call someone else… I could chase that ball of twine like a kitten, but all that happens when you chase a ball of twine is you get twine.

Shovel. Shovel. Shovel. Stones, wood, under the tire. No purchase yet. Break. Shovel, shovel, shovel. Purchase. 2 hours and elbow grease got me free of my dilemma, not a soul having lifted a finger despite calls – an array of platitudes, explanations… but no actual action except a promise of one I explicitly asked for, from the one person who doesn’t let me down when I need it but who was in a tight spot.

With the rear tires on top of the pile of sand, I laughed. Once again, I solved my own problem, once again, I had negotiated a compromise with the land – an inanimate object that I could depend on as opposed to all the bipeds I could call. Understanding it and basic physics had gotten me out. Not the winch I didn’t get just the day before. A cutlass, a spade, and grit.

All someone really has, all someone can really depend on, is themselves – a lesson learned in childhood, a lesson re-emphasized more than once, a strength gained by pulling dead weight, a determination forged in heat and tempered in extremes.

And by getting out, I know that they all think now in the back of their heads that they don’t need to help should I call. That I will find my way as I always do while they cannot, that they call upon me when they have a problem because I am dependable – and maybe, just maybe, my dependability ruins their dependability, making them dependent and weak when I need them.

I should work on that.