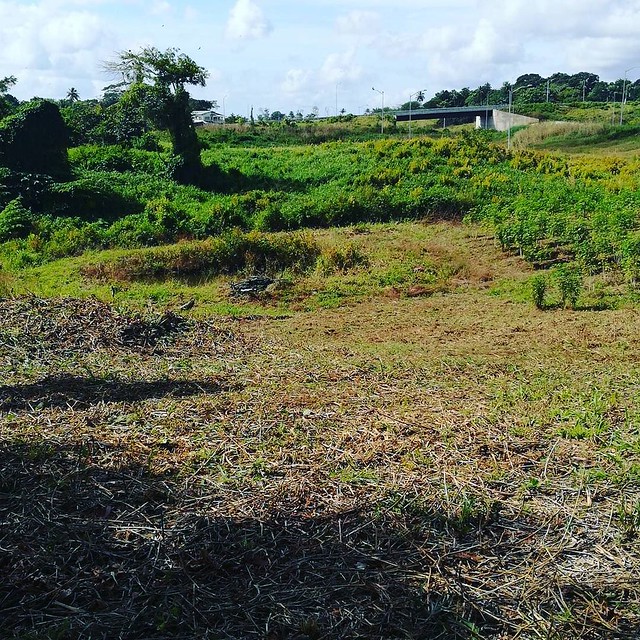 Working on the land daily, there’s a brutal honesty to it. It doesn’t lie; it doesn’t need to. It speaks openly of what it does, there is no subterfuge. In the tropics, the wet season is about to shift into dry – the last of the rains come with vigor and the grass grows where I had cut.

So I cut it again.

The small crops I had been able to sew at the beginning of wet season are cleared of bush, have been cleared of bush for some time – with the exception of the period where we got the heavy rains from Tropical Storm Brett, when it would have been irksome and perhaps even dangerous to work with a spinning blade between them, and when I tried to keep spraying chemicals to a minimum.

My crops thrive when a cousin’s are buried in bush; an Uncle who helped and advised him wanders by the day before Christmas and tells me their cassava is no good. He sounds surprised and frustrated when they let the bush master their land, overgrowing their cassava. In fact, the man who plowed the land for them still hadn’t been fully paid by them – the follies of their world made photosynthetic, just as the crops would have. I cannot speak to such things, I have my own things to worry about.

The land is honest and unforgiving. It has no give unless you work it so. It has no mercy, it has no guile. It compounds the forces of nature to be something greater than the sum of it’s parts.

I have sweat, blood and yes, tears, in the land. It inflicts cuts, bites, punctures and bruises to defend itself and, pushing through that, I have fleeting conquests doomed to failures without due care and attention. Piece by piece, it becomes more manageable – but manage it I must, or it will manage me. This is the honesty of the land, a stark contrast to humans and society where the social construct of promises were once made by those who worked with the unforgiving land, where it meant something, where now promises are something to be broken.

Then the human side – where people not getting paid to pick up rubbish cause people to dump rubbish on land they think isn’t managed – and so you manage that land, cleaning areas and keeping them clean. They no longer dump their rubbish there but somewhere else: People wring their hands in talking to me about it. I look at them now and say, “That is not my problem”, which is not true, but is a necessary answer for those who don’t maintain their lands – a truth that they need to wrestle with if they pay attention and act.

Opportunity: Missed by people because it comes disguised as hard work.

The cousins who own nearby lands fumble through their own relationships with their siblings and try to cash in on the land; I make efforts to see some of them when they come to Trinidad to visit them – we grew up with each other – but they had no time for me, leaving me to sit alone outside. One even blocked me from going inside. I arched an eyebrow, having made the effort to go visit, and realizing that they did not want to see me. This was compounded by the one time during that period where I reached out, at a nearby restaurant with someone giving me advice on the land – out of all of them, one showed up, and he simply spoke with the one advising me.

Another is going abroad, asks me if I want anything – I did not ask – so I do mention a few things. He calls me from the airport to tell me where he’s going, where the gift he left for me is, and I ask him to let me know if he orders a particular item for me so I don’t try to source it locally. Meanwhile, the people who he promised to do something for see me on a daily basis and ask me for updates that I cannot give. I hear nothing from him other than part of a deluge of WhatsApp messages wishing me ‘Happy New Year’. He returns nearby, I still hear nothing from him. Well, ok then.

One aunt spreads lies about everyone in the family, calling everyone greedy when she made sure her brother was isolated and left everything to her in the Will before he died. If you want to find the greed, find the one who has what they think everyone wants. She’ll choke on it eventually. I let her know that on my birthday after she asked to see me, after she spread lies about me, just as she asked me to help her manage her gains – ill-gotten in my opinion. A skeleton choking on a crust of bread.

Last year, another aunt went away and I checked in on her human project, an adolescent who came from a shattered home and less than pristine circumstance that she had taken in. He made promises, he broke promises, he is young – but he did not meet the social contracts that brought him there. In the end, he had to return to where he had come from but, for the duration and after I regularly checked in – not because it was important to me, but because it was important to her. She returns, it’s not spoken of. I make arrangements with her to visit her not once but twice; both times she goes out on recreational sojourns while her husband and I stare at each other. I had tried. Messages to her were rarely answered, if at all.

My time spent on all of this robs me of time to do what needs to be done. No more.

And I’m safe, because the odds of any of them reading this is pretty low.

Meanwhile, others see what I’m doing and help in their own ways – some plants here, some compost there, some business advice, planning advice and planting advice. I do the same. We build relationships like that of the land, not of society. A throwback, I think, to times when people worked the land.

I go to the towns now and then. I will sit and watch people drinking coffee and doing their best to impress each other at one local center, preening. I go get my haircut, I watch people in branded exercise outfits drive to the gym so they can be physically active – I’ve lost 3 inches off my waist in the last month alone (with more to go) over the last month. They pay to be members. What an odd way to live – and I used to live like that before I thought it through. A little before I ended up in the hospital. There’s a lesson there.

I watch the lowered cars pull in, screeching to a halt on the speed bumps or near potholes, impractical in a country that has a debilitating inability to build and maintain roads. Pickups with ‘4×4’ emblazoned on them sit on pretty wheels, nothing more than street cars that run on diesel. SUVs have been made too expensive for most by the government, and their last refuge are these pickups to give them a false sense of security when driving because they can look further ahead – but they can’t brake as well in a pickup. Taxis stop in the middle of the road to drop off their passengers rather than move to the side and allow traffic to pass.

On social media, I read someone’s whine about not being treated seriously in technology and it reminds me of how I had felt and what I had communicated over a decade ago – interesting since I’m not much older than the one complaining now. Without compunction, I wrote that we are not owed change, that whining doesn’t change anything, and that when he gets out of his selfish moat of self-pity he should get back to trying to change things – advice I had to give myself over a decade ago.

It’s a rat race, and the trouble with rat races is that they are full of rats.

I am becoming a misanthrope, some might think. Sometimes I think so. Yet when I reflect on it fully, I am simply becoming what I need to be in a world where people are busy trying to become what they are told they want to be.

And therein is the real contrast. Where someone’s word should be unbreakable, where relationships are valued and treated accordingly. I am becoming me, and this drives a wedge between myself and those who are busy trying to become what they are told they should want to be.

Be who you need to be. The trouble with the world is a lack of honesty to the self about the self which leaks into everything else.

One thought on “The Honesty Of Land”