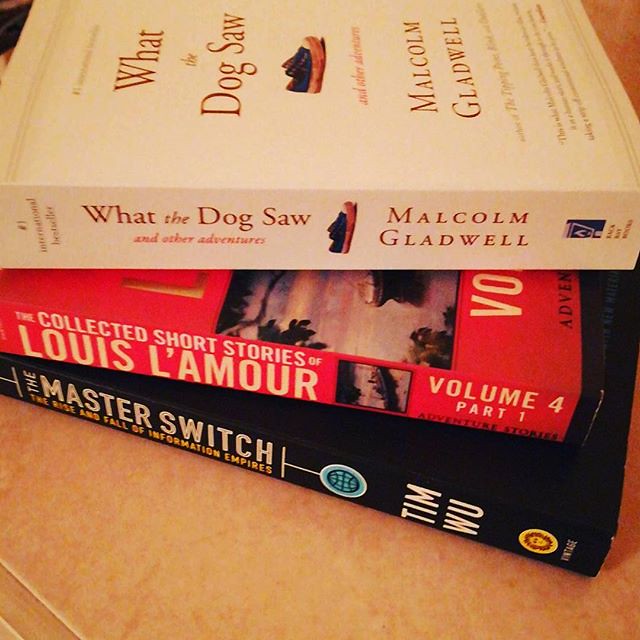 I’d needed a haircut for a few days, but the stylists – whatever you wish to call them – were having bouts of the flu. Today, though, I called and faced the traffic to get there, to have my hair cut – and the lady in charge was kind enough to throw in a complimentary shampoo. The shampoo involved a head massage by a woman I can only describe as gifted.

I was in a good mood. It was rainy. I did not want to go home; a lady asks me if I was hungry – a hint that I was boggled at to the point where I fumbled it. I left, and went to a place I am always comfortable. A bookstore.

In entering, I was immediately asked if I needed help. I said no, and began perusing titles – I liked the Louis L’amour, I always have, so I picked that up because I hadn’t read these stories by the dead author. Some will point out that he wasn’t the best Western writer, talking about how his publishers made sure his books were prominent… I don’t know. I do know that my father purchased all of them, that a Louis L’amour novel lasts me about 4 hours at most, but that I always enjoy them.

Another young woman comes up to me and asks me if I need help. I said no again.

A few more minutes perusing. Looking for minds more original than my own has become difficult; I scan titles and look at cover art. I read the back covers, instantly annoyed at how marketers have taken over that spot to tell people what other people have said about the book.

I don’t give a shit what anyone else says about the book, I want to know what the book is about.

And… a young man comes up to me and asks me if I need help. I stare at him. “You’re the third.”

“The third person who asked me if I needed help. I don’t understand why. If I’m in a bookstore and I need help, I probably shouldn’t be in a bookstore.” I said this maybe a little more annoyed than I should have, but I let it sink in a moment. This attempt to play librarian in a bookstore forgets that the librarian sits quietly until provoked; the librarian doesn’t go around asking people, “Do you need help?”

I scan titles I’ve seen easily in the background as I considered the plight of the young man.

“Look, I’m sorry, you didn’t deserve that and you’re doing your job as your employer says you should – and maybe even as the market dictates. So I apologize. It’s just that I know my way around the bookstore, I like the joy of finding things I couldn’t possibly tell you about because I don’t know them yet.”

He accepts the apology, but I see that my former words had stung more than my latter words had soothed. He wanted to explain. I let him, let him let the ooze rip from the cyst I had accidentally incised with my words, nodding at moments, keeping eye contact, but flipping through the books I had scanned in my mind. He needed to let go of something, I didn’t need to hear it. His face relaxed. He was done. I smiled, nodded and said, “I think I understand” and continued looking over the shelves of books.

The young woman who had asked me if I needed help first witnessed the exchange. She assured me he was fine, but her assurance didn’t mean he was fine. He was sensitive. People had been nice to me today. Part of me wanted to shout at him to toughen up, the other part regretted my casual abrasiveness. The latter won this time.

Most of the books were ancient in the age of the Internet; a point of anguish for me sometimes, but also a time of opportunity to see some of how the roots of present ideas form. I read very, very fast – not ‘speedreading’. I just read fast and have a reading comprehension that frustrates me to no end when people with degrees are so bad at it. So, while the books are generally what’s sent and left in this tropical armpit of the planet, where books come to die, there are opportunities to explore things – with the knowledge that the information in them is likely outdated. It’s better than reading ingredients on soup cans.

I peruse some more, finding the Gladwell that I so often tried to use as a reference for some of the solid concepts he has written about – but I had left my copy in Trinidad the first time I had left, had left the copy I had in Florida, and was down here without a copy. And I picked up one on the rise and fall of information empires — something that I’m constantly researching new perspectives on (because none of them truly fit). I explore more, seeing the same tired titles that no one wanted yet.

I encounter the young woman I had first met upon entering the store – she’s nestled quietly in a corner with a book, reading.

“Ahh, that’s exactly what I would be doing if I worked here.” Nothing makes a literate person more comfortable than seeing the person working there reading instead of pestering them, in my mind, but we’ve already established I’m an outlier (gratuitous Gladwell reference).

She looks up and smiles, “I love working here. I get to read.” Well, look at this – a rare bird in this day and age, the Literati Exoticus.

She looks at the books in my hand, “I see you found some things. Why did you choose them?”

So I go through, explaining, “Well, the Louis L’amour is like cocaine to read; it’s fast, action packed, well paced and unfortunately over quickly leaving you wanting more. The Gladwell is something I like to refer to when writing, but I don’t have a copy so I’m getting this one. And this one is about Information Empires, which I’m interested in because I find myself writing about them indirectly.”

“Ugh. I wrote an eBook that got published back in 2005 or 2006. I wasn’t pleased with it, but yes, I’ve been published and I do write… though I haven’t published a book since then.”

“Partly things changing so fast, partly procrastination and all the excuses not to write, and partly too many projects I’ve started and not finished.”

“I want to write children’s books.”

We laugh. In conversation she points to the bookshelf next to her as a generic reference to books and accidentally points at “50 Shades of Grey”. I laugh, telling her what she pointed at – and looking around to see that the store was empty of other customers, went on to say, “That book is so horribly written.”

Enter sensitive Third, who apparently loves the book. I try to make the distinction, “I’m not saying it’s a bad book… I’m saying it’s horribly written.” An attempt to be honest without being dishonest to smooth over the sting. This poor guy looked like someone kept walking by and killing puppies. I decided that there was nothing to be done, that I had been kind enough, that part of growing up was facing facts and that the “my puppy died” face was just to trigger enablers.

Fuck enablers. I’ve seen too many make children of what could have been men in my generation and prior. There’s a place for sensitivity, but there’s that thin line.

His eyes grow distant, as if I had also killed puppies in the distance. Or maybe he was sad yet thoughtful. It’s not my business, my business is being honest and, at times, hurting feelings – conscientiously, for ‘the greater good’.

I bought my books, having made a friend of one person there and having killed a few virtual puppies of the other – a shame because if the puppies were real, I’d probably still be playing with them. Who doesn’t like puppies?