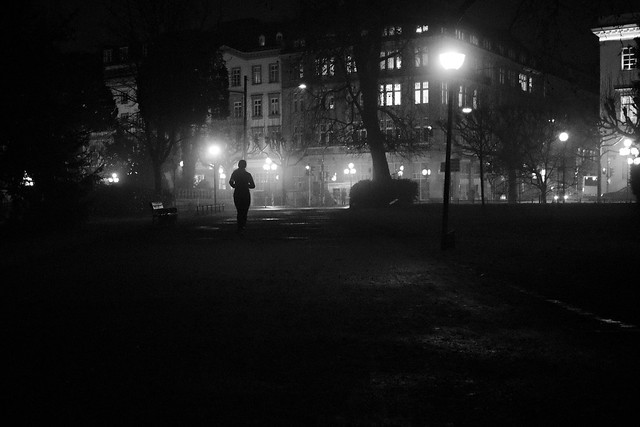 I wake up earlier than most. In fact, I wake up when some are only considering going to bed.

And every morning, where I live, there’s a woman older than I doing a shuffling run past me as I sip my coffee. Every morning. She’s overweight, her clothing baggy – perhaps revealing how well her exercise and perhaps diet is working for her. She sprints up the hill nearby.

The most we have talked is exchanging pleasantries.

I watched her this morning, her shadow running ahead of her figure under the street light, and finally saw her form. Her breathing was right – 1 step, 2 step, 3 step, breath out. Her pace was that of a fast walk, she avoiding bouncing as much as she could – she has a pendulous problem on her chest which must play hell on her back. I almost wanted to tell her that she’s killing her knees on the pavement, but I bit my tongue. She would know after this much time that was the case, she knew what hurt – how could she not? And yet, she was out there doing what she needed to do, avoiding the heat of a tropical sun and also avoiding those that might mock her for what she is seen as and not what she sees for herself.

I’ve been there. I might even argue I’m still there, though running is no longer my thing. And I think back to the first time I saw this in someone else.

It was in Field Medical Service School. Sure, in Navy Boot Camp I saw kids flailing about when running – I was the pacer, and if I caught the straggler as we went round, they went off to remedial where I didn’t see them. That I had become a pacer had been a joke but a good one – at 5’3″, my stride is shorter and therefore I have to work harder to meet the same times. Youth and growing up pedestrian gave me a natural advantage at that age, so it was all good.

Field Medical Service School was different because I had gotten soft since boot camp, but I had started training well before it – enough to pass the physical requirements of an elusive rating that I could not get into because of my myopia.

At Field Medical Service School (FMSS), we had a kid – he was a kid, about 18, the scars of acne still forming on his cratered pink face. He was large. He was, sadly, what every Marine accused sailors of being – and here we were training to be the sailors that were attached to the Marines as their medical support.

This was his 2nd time. He’d failed to graduate the last time. He told us his Master Chief had sent him to FMSS as a punishing joke. And every day, he ran – or better, scuffled with the ground through his feet and boots or running shoes. His toes pointed inward naturally, his frame was large and hidden in fat accrued over a lifetime.

He was, of course, scorned by us – at first. That scorn in a unit meant strengthening the weakest chain, and in a group of young Corpsmen, that can go from being snide now and then to being an outright jerk. But he kept on. We all watched what he ate; he did push-aways at the food table. He was almost always hungry, but he was determined enough to go a little hungry. He ran every day outside of our normal physical training. He kept to himself, but in the common barracks we kept an eye on him. In a way he scared us – he was driving himself into a meltdown, and we’d all seen Full Metal Jacket.

There was a Marine Corporal instructor who was a complete jerk to everyone, but amplified times ten with this poor kid. The kid could do nothing right for this Corporal, even when he did right. As someone of equal rank of the Corporal at the time, I wanted to throttle him a few times. He sensed this; it’s hard not to see when I dislike something – and he was acting the bully, and acting the bully is something I can never stand. I did end up getting the upper hand after I graduated. There’s a good story. Maybe another time.

I called in the Corpsman instructor after at least 10 Corpsmen in training looked at the kid’s feet. Light duty it was, for a while, but I no longer shunned the kid. I took an interest in him – the weak link in the chain of ‘3rd herd’. When he got off light duty, we ran together – his pace was hard on me, that slow pace, but it was good for me. Others took over, and slowly more and more of 3rd herd was working with the kid. We wanted him to graduate. He was one of us. Sure, he might have a past at his last command, but while he was with us he worked harder than any of us.

In the end, he failed the required run for graduation by one second. We were crestfallen – we pleaded, collectively, for him to have another chance – and that same Corporal refused.  One second. But a second is a second, and there were no second chances. He would be held back to go through FMSS a third time. There was nothing to be done. He was moved into a separate barracks even as all of us celebrated passing – salt in his wounds.

I wonder sometimes how that kid fared. I do know that the Corporal, that pudgy fellow, got his come-uppance through myself and a few others as well as the Command, but years later I realized that he was such a jerk not because he didn’t like the kid, but because he was just a jerk who had probably had to go through Parris Island as that kid.

Yet I remember that kid’s spirit – the eyes that shone through tears with a burning desire. He had decided somewhere along the line that he would not break, that he would do everything to achieve what he had to. But even then, he was put into a position where he was forced to.

And this woman shuffling every morning? She wasn’t being forced. Purely voluntary, much like me going and working on my land every morning while others are comfortably in bed. While people younger than us with similar complaints, more overweight than us, read books, try diets, watch instructional videos and buy gym memberships that they never use (a boon for gyms everywhere) but but don’t actually do anything.

We all have this idea of who we are but very few of us meet who we really are, where we push our grit to the limits – where we fail every day at something just so we fail less every day. Where we command our lives while others do not, who plot our courses one foot over another while others stare at the ground worried about their footprints.

That woman is deserving of more respect than most people I know. She has decided to do something, she is doing something and over the months she has continued doing something. Silent running, her grit driving her forward to whatever lays beyond.