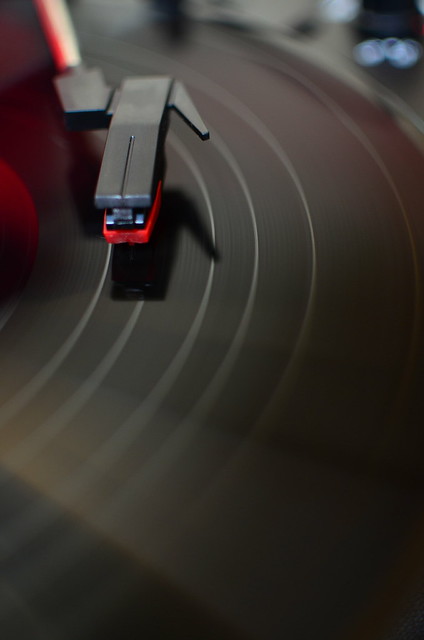 Vinyl. Some audiophiles still say that it’s the best way to listen to music as they don their rubber gloves, pull their records out of the cardboard holders (plastic removed to avoid warping of the vinyl), carefully placing the record on the turntable, adjusting the speed for a 45 (single) or a 78 (album) post WW II, and 33 RPM later on for albums.

Today, the MP3 reigns supreme – a compressed version of the music where the frequencies are kept only to that which the average human ear hears. Yet there was a time before this, a time before the 8-track tapes and later cassettes and the then ubiquitous Walkman cassette players, before compact discs (CDs) (Hat tip to Valdis Krebs on his correction through LinkedIn).

In the house I grew up in, a Sansui amplifier and tuner was the core of the sound system – 2 Technics turntables, a reel-to-reel system, and a dual Technics cassette deck with Dolby recording and playback ability. When alone, the wooden floors vibrated as only speakers made in the 1970s would make them. Every Friday, Patrick and I would look over the Billboard Top 100 to watch the trends, and I would go off and buy some 45s at the local record store.

I learned early on that what I liked wasn’t always popular. With music slower to come by than it is today, I’d end up flipping the record over to hear the other single that came with the record. A great example of this was the B side of ‘Shout’ by Tears for Fears: The Big Chair. A mixing dream, really.

I’d end up exploring the work of artists other than what was popular. Sometimes it was crap, something that the recording company chose out of their discography that didn’t even make it onto an album, and sometimes not.

We don’t do that anymore. I’m not even sure that many people did it in the first place, daring to spend the time to see if they liked the song, but I do know that at least some hit songs came from B-sides. You can read about some here, and some others here where you can listen to them. Think songs like, “You can’t always get what you want” (Rolling Stones) and “Revolution” (The Beatles).

In an odd sort of way, we were allowed to explore the music of artists through their detritus on the B-sides of albums – the stuff that publishers ‘threw away’, not wanting to give a free hit single away with another. And yet, some of their greatest mistakes are treasures – some popular, some not, the listener deciding what was good or not simply by flipping a record over and checking.

The Internet brought us the ability to get music like never before. I’d like to think most of us legally buy music, I’m certain at least some of us download without paying some service or publishing company. Artists in some cases have bypassed the middlemen in this, allowing us to purchase directly from them through websites. Some even make their music available for free here and there.

But the services, just like yesteryear, are about maximizing profit. There are no more B-sides; we are bombarded with things that are algorithmically decided for us as we stream music. Just as on social networks our digital shadow – what we do online – is used to decide what we see, so it is with our music. Alternative – how can something be alternative when it becomes mainstream? – is even decided for us. We are less consumers now, maybe, than we were before the Internet in that there is no conversation (hat tip to the Cluetrain Manifesto), decisions about what we get are decided not even by other human beings but by statistical and heuristic analysis of our data. We are, in the eyes of algorithms, what we were, and not what we can be – never-mind what we should be.

Generations have passed having never flipped over a vinyl record, having never read something not decided for them…. we are become the algorithms of our algorithms, the ‘tools of our tools’ as Thoreau might write today.

Unless we find the B-sides of our lives.

One thought on “The Lost B Sides Of Our Lives”