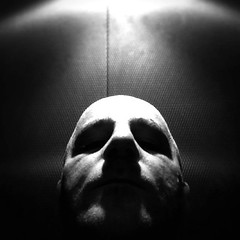 I use elevators now and then – typically, I go with stairs just to get the exercise, but sometimes the elevators. Over the last week or so, I noticed something peculiar.

When I was getting off the elevator, the pupils of the person in front of me constricted – I tend to look straight into people’s eyes. A constriction like that is generally of anger, disgust — you know, those bad emotions.

It dawned on me that they were simply not expecting someone to come out of the magic room they use to go to other floors, and that when they stood right in front of the elevator and expected to walk right in as if they were the only ones on the planet, seeing someone like me waiting to get off at the very boundary of the door was disconcerting.

Which is why many normal human beings I know don’t linger right in front of the elevator, instead staying back to allow people to exit.

And that made me wonder if my pupils constrict when I see someone in front of the elevator when I’m about to get off because I’m irritated at people who crowd elevator doors.

All of this from some constricted pupils, which could also be caused by my silhouette against the elevator lights.

This is why I don’t enjoy people that much.