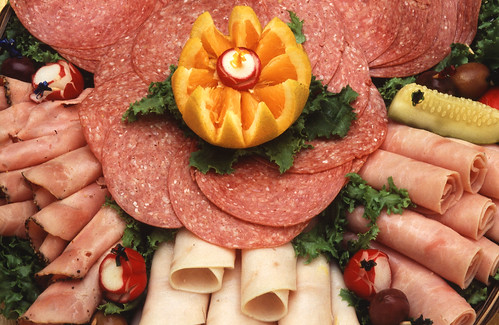 Once upon a time, when life was a little idyllic, somewhere before age 9, we were going on a picnic – my mother, father and myself – and she asked this little boy what kind of sandwich he wanted.

Without thinking, I blurted out that I wanted Genoa Salami and swiss on rye with a pickle on the side, and a Coke, please.

My parents stared at me. My mother looked at my father, and while I could not see her face I saw his full response. He shrugged, arched an eyebrow, “If he doesn’t eat it, he won’t eat.”

So she proceeded to make the sandwich under my careful supervision, with me handling the mustard – we didn’t have fancy mustard back then – just so. And all was well in the world at lunch time when I devoured that sandwich in front of my puzzled parents and actually wanted the other sandwich that I had begged my mother to create while telling her how pretty she was. “The Snowman”, she would call me.

This all came to mind in the fast food aisle at the grocery store today because, as luck would have it, I was picking up Salami and Swiss (and I’m baking my own rye).

It dawned on me, right there and then, that this was the most honest answer I had ever given anyone… ever. There was no thought. There was no questioning. There was simply the assembly of ingredients in my mind that came straight out of the mind of a 7 year old, without guile, without a hidden agenda, without even influence.

I was asked what I wanted. I was able to answer without worrying about expectation, what the other person would want to hear, and so on.

For a long time, I lost that, and if I’m honest with myself, it is even now difficult after years of my self-rehabilitation.

Children, in happy homes – and up til age 9 or so, mine was – have that gift of honesty. They don’t care. They say it. They mean it, and the only trouble is that they don’t necessarily have the words or data to express it as best they can to adults that aren’t as honest with themselves.

We go through our lives, thinking we’re giving honest answers, when so many aren’t.