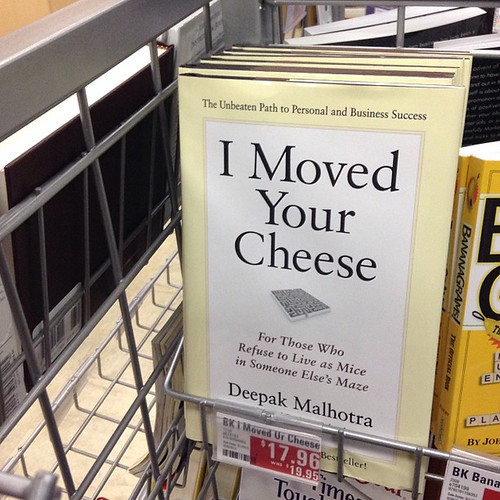 I was reading an article where a local student took the Trinidad and Tobago Ministry of Education to task about moving his cheese (and in finding the image to the right, I found perhaps another interesting book to read).

I’ve been reading David Epstein’s Range, a book I’m being particularly careful about because of my own biases. I am, after all, a neogeneralist, so I have been getting a lot of confirmation bias throughout the book which requires me to work that much harder to consider it objectively. So far, it has not disappointed.

With that book on my mind, and my own alma mater being the school that the student was in, I considered. For example, during my years at Presentation College, I hardly planned my future according to what I could get a scholarship for. Thus my first read of the article was one of, “what’s wrong with this person and why do they seek specialization based on scholarships?”. After some thought, the foundations already laid by Epstein’s book, I considered how much I detested those specializations… for example, why couldn’t I do Physics, Chemistry, Biology, Computer Science and English Literature at the same time? I was shoved into a rut. And this person is only guilty of embracing the rut.

It also struck me that this demonstrated the education system lagging society. When I attended DeVry, as an example, they were teaching the BASIC language (which I had already gotten 5 years experience in!), and was not object oriented back in 1987. So I tested out of that class and learned PASCAL and C/C++ during that time which I was not credited with… but which the real world embraced through providing me income.

It seemed a bit peculiar to me, too, that someone pursuing a scholarship had sufficient money to take the Ministry of Education to court. That is a bit peculiar, but not something that isn’t impossible.

There will be more on this sort of thing here… but I wanted to get this little thing out now as it may be a linked reference to the other things I write on the topic in between procrastinating about other things.