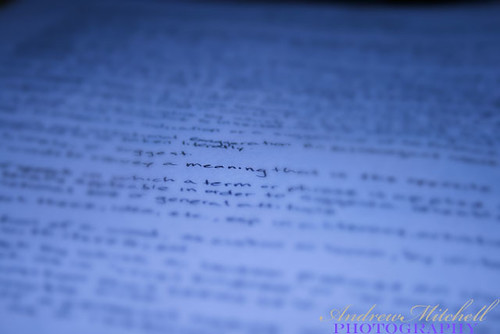 As a child, my mother would tell me to clean my room, something I often felt was a punishment or a way to get me out of her hair which was at least partly right given what I have learned as an adult. And so I would go and do things, largely unproductive, and then say I had cleaned my room.

She never thought I had. And after a while she seemed to realize she and I had very different ideas of what a clean room was and told me that before I told her that the room was clean I should stand at the doorway, pretend I was her, and see if the room was clean. This was a great idea, but poorly implemented in retrospect, as she never quite told me what she was looking for in a clean room. Suffice to say my room was never clean in her eyes, and in mine it was almost always clean.

Everyone has some sort of story like that, where in communicating we might say the same words with very different meanings, and this negotiation is something we end up doing every day.

Yesterday, someone wrote that gravity was ‘the way that objects were attracted to each other’, which doesn’t stand as much rigor as he was trying to demonstrate. There are other reasons that objects are attracted to each other, such as ionic and covalent bonding, and gravity by itself isn’t an answer as much as a question. Sure, scientists have learned a lot about gravity, but the notion of gravity itself as we accept it and how scientists deal with it is different. Gravity is an explanation, and more accurately, it’s an evolving explanation, as everything is.

Meaning changes. Meaning is constantly being negotiated between people, between peoples, and even within ourselves. At some point, we as individuals decide when we’ll just call something by a name, and collectively, society does the same based on how popularly lazy we are about it – after all, if we got muddled down in being pedantic about everything, nothing would get done – but underneath it all, we have to understand, everything is being negotiated.

And everything we agree upon will eventually change.