I’ve been doing some research for something I am writing, and it became apparent that I needed to have a bit more in depth knowledge about ecosystems and so on. So I set about starting a planted aquarium where I could add ammonia and feed the plants through that process. The ‘why’ of it is simply research. 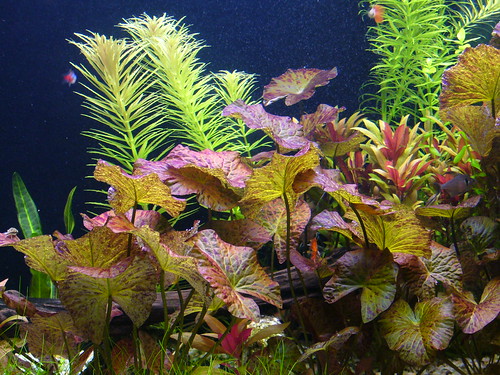 In doing this, I went out, got a tank, etc, and of course everyone assumes I’m going to put fish in it. The idea of simply having plants in a tank of water hardly seems of worth to pet shop owners that sell aquariums, but I have my reasons.

Now, for those of you new to aquariums, there are things like pH you have to monitor, and if you’re on Earth instead of snooping from a distant planet or spaceship, you’ll need to understand that the nitrogen cycle must be started. Plants need food to create oxygen and carbon dioxide through photosynthesis. All the guides on this, as you would expect, tend toward having fish in the aquarium mainly so that they can poo, but it can be done with household ammonia. If I were planning to put fish in the tank, I’d probably start the cycle with ammonia anyway, particularly after what I have learned so far.

What I found was that my tank’s pH was 8.4, which is extraordinarily high and bad for fish – 7.8 is the high end of where plants are fine except, perhaps, some plants I am unfamiliar with. 6.5, by the way, is the low end.

So now, the trick is to reduce the pH. As a novice at this – thus the research – I go, get some aquarium stuff to lower the pH, and try it out. No dice. So rather than spend a bunch of money, try vinegar. No effect. Check the input water and find a high pH – aha! Check the filter on that tap, aha! Full of gunk. Address, partial water changes, repeat.

See, what most experienced people don’t talk about to novices is kH – carbonate hardness. The carbonates act as a buffer against the acid, and a high kH means that there is less likely to be a pH swing since addition of acidic content simply can make a high kH aquarium giggle like a pleased young mermaid. And this was the real issue I was dealing with.

And then on top of all of this, there is the general hardness (gH) which has to do with magnesium and calcium ions in the water. When aquarium fish are said to enjoy ‘hard’ or ‘soft’ water, this is a reference to gH.

A week ago, I knew none of this. But the interrelations in the ecosystem with such basic chemistry are exactly why I’m doing the research – pH, kH and gH form a triad related to the nitrogen cycle in an ecosystem, so already this is a worthwhile endeavor.

It also gets you thinking about other things when you sit in your writing area. It makes you think about people, and how they can have their own pH, kH and gH. And that is an even more derivative thought worthy of exploring in quiet moments in the writing area.